The beginning of hostilities in Ukraine dates back to November 2013, when President Yanukovych, backed by Russia and Putin, rejected an agreement for closer integration with the European Union, triggering widespread protests in the streets. 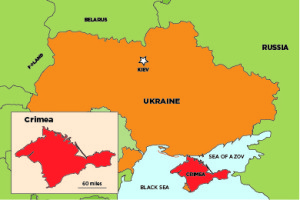 The bad moods increased during the winter, culminating in the month of February 2014 with the fall of the Ukrainian government and the escape from the country of President Yanukovych. This situation triggered the reaction of Moscow, which effectively supported the pro-Russian revolts in Ukraine that led to the proclamation of adherence to the Russian Federation by the Parliament of Crimea. Subsequently, on March 16th, the Crimean status referendum established the first definitive tear in Russian – Western political relations. This resulted at the end of March in the exclusion of Russia from the G8.

Meanwhile, the pro-Russian were advancing in the east of the country, with Donetsk and Lugansk that voted in a referendum for independence from Ukraine.

At the same time, on June 27th, Ukraine signed an association agreement with the European Union, triggering Moscow’s anger. Just that date coincides with the greatest strength point of the Ruble in 2014, when the change started to rise quickly toward new lows against the Dollar.

From the currency point of view, many interesting dynamics have developed since the outbreak of the Russian-Ukrainian crisis, offering investors various profit opportunities.

Usually, when financial stresses occur, the dollar tends to be an excellent safe haven, as the purchase of U.S. government bonds moves the buyer’s money to a theoretically risk-free financial asset. 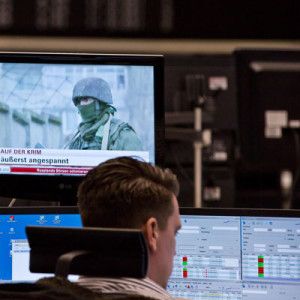 In fact, this phenomenon was recorded from November 2013 with more and more consistent switches from the most vulnerable currencies, such as the emerging ones, up to stronger currencies like the US dollar, the Swiss Franc, or the Euro. However, the real winner was the dollar which was appreciated by more than 5% even against the Euro. In this case, the purchase of a U.S. government bond in dollars or the opening of a foreign exchange account in dollars, or the opening of an account with a broker specialized in forex trading with a subsequent decision to trade long dollar against euro or ruble and other involved currencies could have been the correct choice of investment.

One of the reasons behind this dynamic is also linked to the fact that emerging markets such as Russia carried out bonds issues in both local currency and dollars; investors had the chance to take advantage of these moments to move their investments from the local currency (in this case the ruble) to the hard currency such as the dollar the United States.

The war tensions that are still involving Russia and Ukraine represent a negative element also for neighboring countries, damaged by the commercial exchange as well as the theoretical military risk of enlargement of the war front. For this reason, major international investors have preferred to sell Eastern Europe currencies such as the Czech koruna (CZK) and the Hungarian forint (HUF), whose performances have been quite negative since November 2013.

When we start our forex trading, we often tend to focus on the technical analysis of price charts. In reality, changes are also affected by events that are not always economical. We are talking about political events or, as in this case, acts of war that frighten investors that prefer to change the local currency of the under-pressure country (in this case, Ukraine and Russia) for safer investments.

The UsdRub graph clearly shows the psychology of forex investors from when the tensions of war developed. The first wave of selling rubles and buying dollars was recorded in November 2013 with the start of the crisis, while a second wave with similar behavior occurred in June 2014 when Ukraine agreed with the European Union, generating a new tear with the government of Moscow. 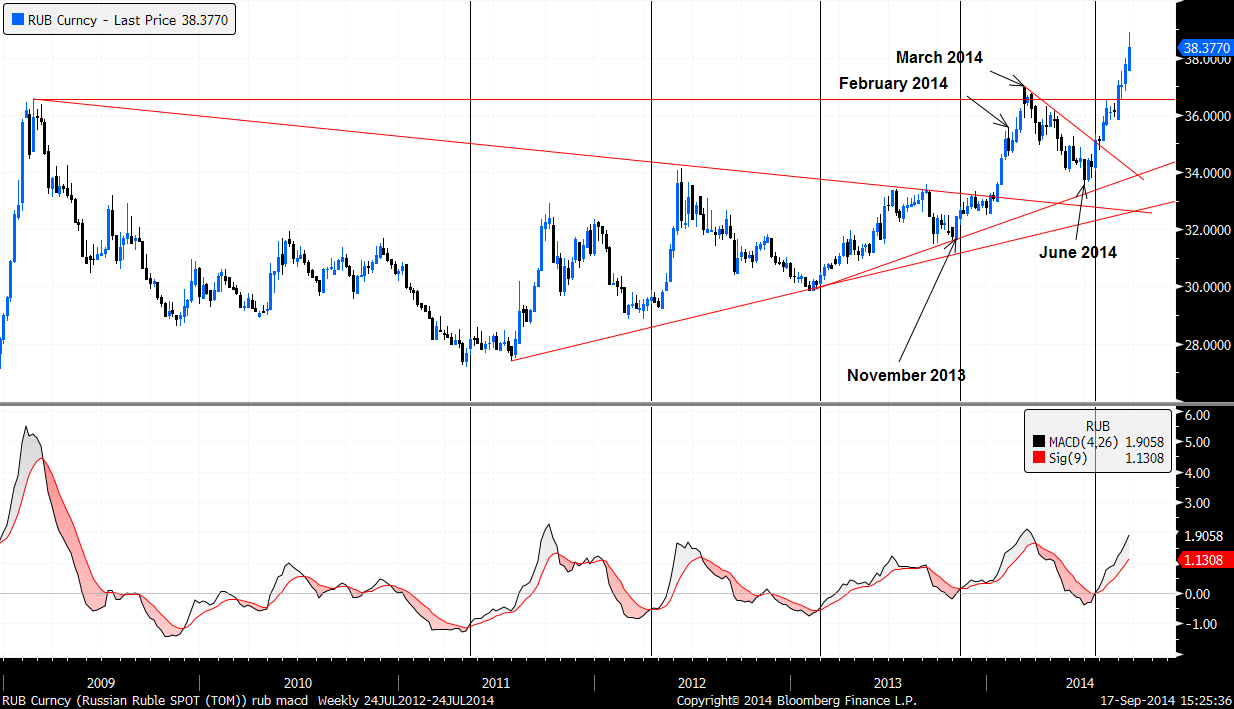 Therefore, it is very important for forex investors to consider the balance of their investment portfolio. Never be overly focused on a currency, but seek diversification; within this diversification, higher-yielding currencies (usually the emerging ones) must then be mixed together with currencies best suited to deal with moments of tension and volatility in the financial markets (such as the US dollar or the Swiss franc).

Using this type of money management, every investor can reduce portfolio risk while maintaining a good return.

In the coming months, the military tensions between Ukraine and Russia might disappear or explode to offer those who invest in the forex various investment opportunities. Through any online broker, investors can be timely and make even more speculative investments, taking advantage of the pessimism moments, but without forgetting the need to maintain a portion of the portfolio in risk-free assets such as gold or dollars.