If you want to learn more in-depth strategies of how to spot forex trading opportunities then have a look at Forex Hero – the trading game, it’s the #1 learning game for beginners and beyond, and it is 100% Free.

Another great resource is forex trading pdf – where 4 years of learning knowledge have been distilled into a beautifully illustrated pdf.

1. Soros breaks the Bank of England and earns $1 billion in 1 day

September 16, 1992, went down in history as “Black Wednesday”, the most notorious forex market event where Soros earned the nickname “the man who broke the Bank of England” because of the transactions he performed together with other traders against the Sterling (Nickname of the British Pound. To uncover the nicknames of all the major currencies you can read The Secret Handshake of Traders)

They didn’t break it directly, but the devaluation of the pound was so bad that Britain had to take it out of the European Exchange Rate Mechanism (ERM). 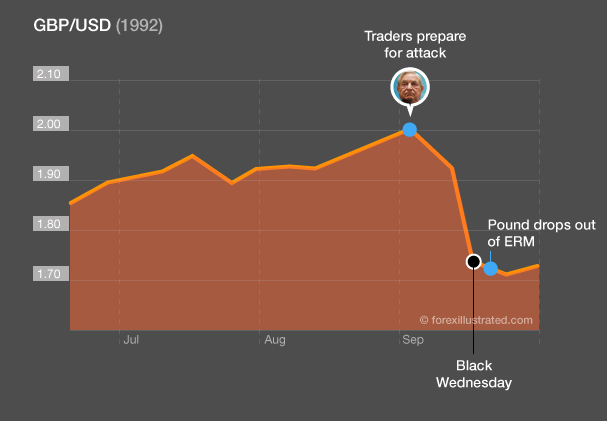 Even though Britain was in a recession in 1990, the pound (also known as sterling) joined the ERM that year. It fixed the pound’s rate to the Deutsche mark in order to make the investments between Britain and Europe more predictable and stable. But as the political and financial situation in Germany changed during its unification, many ERM currencies were under big pressure to keep their currencies within the agreed limits.

Britain had the most problems: its inflation rate was very high and the USD rate (many British exporters were being paid in USD) was also falling. As it became clear that the pound was not able to artificially withstand the natural market forces, more and more speculators began circling around and making plans on how to profit from this situation.

They waited until the financial situation got as bad as it could naturally get, and then created extra pressure on the pound by selling it in huge amounts. The most aggressive of them was Soros who performed this transaction every 5 minutes, profiting each time as the GBP fell by the minute.

“The money that I made on this particular transaction would be estimated at about $1 Billion dollars. We very simply used the forward market – you borrow sterling and you sell the sterling that you’ve borrowed. And then you buy back the sterling when the loan expires.”

Let’s look at a simplified example to understand this trading strategy:

In order to sustain the fixed rate, the Bank of England was buying 2 billion GBP an hour, which was an unprecedented amount. The policies of the ERM demanded that the countries with the strongest currencies have to sell their currencies and buy the weakest to help maintain the equilibrium. In this case, the Bank of Germany had to sell Deutsche marks and buy pounds.

However, they didn’t come to Britain’s rescue because apparently, Germany had an interest in seeing the GBP devalued. All of Britain’s efforts to pump in money and increase the already high interest rates proved futile. In the late afternoon of September 16, as the traders understood that the Bank of England had insufficient amounts of foreign currencies to buy in all the pounds that were sold, they pushed even more which resulted in a collapse. At 19:40, the British prime minister confirmed defeat and declared that Britain is leaving the ERM.

Watch the video to see more details about the Black Wednesday:

Have a look at how the British Pound is doing against the US dollar today. Maybe you can spot a nice trend and make a profitable trade!

The second most notorious trade of Soros came in 1997 when he saw a possibility that the Thai baht could go down. So he went short on the baht (by going long on USD/THB) using forward contracts.

His actions were often considered a triggering factor, which resulted in the big Asian financial crisis that affected not only Thailand but also South Korea, Indonesia, Malaysia, Philippines, Hong Kong, and others. 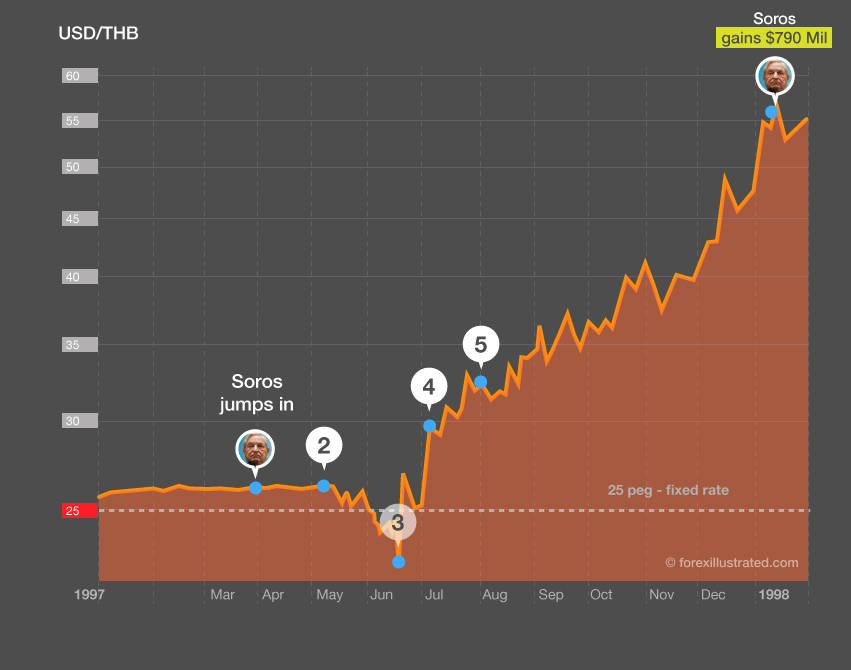 This is how it happened:

2. Thailand spends almost $7 billion to protect the baht against speculations.

3. Soros sells all his baht resources and publicly warns people about its possible fall and ensuing crisis.

4. On July 2, Thailand is forced to give up the fixed rate of the baht and it starts to float freely. Thailand asks for help from the International Monetary Fund (IMF).

5. Thailand takes on hard austerity measures to secure the loan from the IMF.

Japan’s economy was seriously damaged after the devastating tsunami in 2011 and its economic recovery had been slow. Since then, traders have been waiting for the yen to weaken.  This started to happen at the end of 2012 when Shinzo Abe (then a candidate for the Prime Minister post) publicly spoke about his plans to weaken the yen in order to boost the economy.

Taking into consideration his high approval rating, this was a good signal for the investors to open big USD/JPY positions, betting that the value of the dollar would rise against the yen. 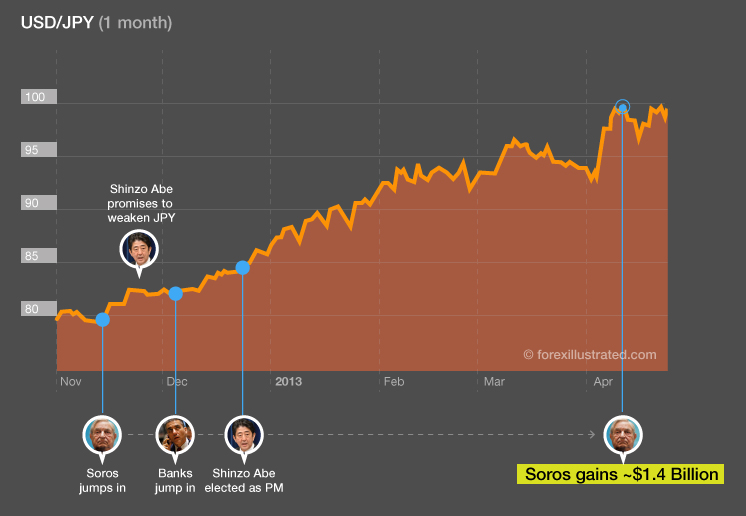 The first one to jump in was Soros who is legendary for his skills of shorting different currencies with high leverages and worldwide consequences. He forecasted the upcoming trend and the Soros Fund Management allocated 10% of its $24 billion to USD/JPY in mid-November 2012. Since then, they have gained $1.2 – $1.4 billion (according to sources close to the Fund) in this deal and the yen is still going down.

Other big players who opened similar positions include Daniel Loeb, David Einhorn, Caxton Associates, Tudor Investments, and Moore Capital. These huge bets helped increase the momentum of the yen’s slide. This was not only beneficial for the traders who went short on the yen, but also for Shinzo Abe who knew that a weaker yen could make Japan’s export more competitive.

This, in turn, was heavily criticized by EU countries who understood that such intervention would lower their export potential because Japanese production would cost less and less. Banks and hedge funds soon started telling their clients to go on this bet as well. The dollar increased, even more, when Shinzo Abe was elected as the Prime Minister on December 26, 2012.

After this, even the Bank of America jumped in to make profits from this trend. Luckily for Japan, these moves of Soros and other traders didn’t threaten its currency as it did when Soros went short on GPB in 1992 and on Thai baht in 1997, damaging both currencies and creating financial collapses in both countries. The reason for this is that locals own the biggest part of Japan’s resources and debts.

What can we learn from these super deals?

The main strategy of Soros and other traders is to spot the upcoming economical vulnerability of a country and then go short on its currency right before the fall happens.  The highest potential for currency fluctuations —and consequently, gains— is when a currency has a fixed rate tied to another currency, as in the case of the pound and the baht.

In these cases, the weak countries were very vulnerable to speculations as they tried to artificially sustain the fixed rate by buying in their own currency. This artificial currency balance is prone to dramatic collapse when it can no longer withstand natural market forces. In the case of the Japanese yen, the signal to go short was when the Japanese government said it would depreciate the currency in order to boost its economy and attract investors.

As you can see from these examples, economic crises often offer the best opportunities for currency traders. Of course, it looks much easier when observed in retrospect, but these are patterns that can be used by everyday traders as well.