Knowing the best market hours is pretty critical for successful trading. Despite the fact that the currency market is open 24h a day, there are indeed specific times when experienced traders trade and when it is better to avoid trading.

If you are interested to see which specific hours in your time zone can bring the highest potential gains then you can check this forex market hours tool or download the FREE mobile application Forex Hero and check the section Golden Hours.

In this article, you will learn what are the best market hours of the day for trading, which day of the week is the most productive and which trading sessions are considered to have the most potential. So let’s analyze when is the best time to trade:

Foreign exchange is a global market where trades are made from different time zones all over the world so the market is open 24 hours a day giving traders the freedom to choose when to work.

But is it active and profitable all the 24 hours?

Very often beginner traders are misled by the fact that currency trading happens 24h a day – so they start trading in times when nothing happens as it should.

There are specific times when the activity and liquidity peaks – they occur when the most active sessions overlap.

At these times the amounts of active traders and resources are the highest giving more fuel for rate trends and movement distances.

But first let’s look at 4 fundamental factors that determine potential gains and the liquidity in different market hours:

1. Money can be made when the exchange rates are going up or down, the higher the volatility – the bigger the potential gains or losses.
2. Currency rates are hugely influenced by the demand and supply of currencies, thus the biggest rate fluctuations occur when the volume of trades is the highest.
3. During periods of low activity, the spreads (commissions) may widen (increase) as the overall liquidity drops.
4. Forex market consists of 4 major trading sessions – London (Europe), New York (United States), Japan (Asia), Sydney (Australia & New Zealand). Each of these sessions is 9 hours long and these are the times when the majority of trading happen.

In order not to get confused by the multiple time zones traders use a common time of reference – Greenwich Mean Time. Depending on the time of the year (daylight saving time shift) GMT is 4 or 5 hours ahead of the U.S. Eastern time as there is no daylight shift used in GMT. 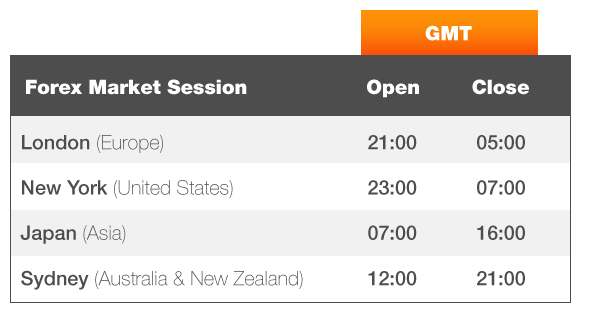 As you can see in Figure 2 – the most active session is in London which is considered to be the capital of currency trading.

Great Britain is the most important market as it consolidates the trades from all Europe and constitutes more than 30% of all trade volume.

The second most important and active market is New York and then comes Tokyo. 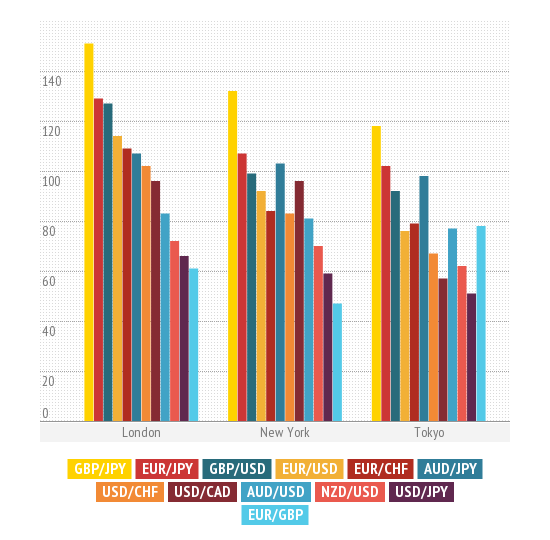 In Figure 2  we can see which currencies have the biggest average movements during the TOP3 sessions, but the biggest movement in pips does not always coincide with the most traded pairs as volatility is not the only factor in choosing the best pair to trade.

Let’s have a look at how the trading session times overlap in Figure 3.

As the two busiest sessions are in London and New York, the highest liquidity is when these sessions overlap – then traders can purchase currencies from different countries.

Many professional traders consider 14:00 GMT to be the finest time as London is preparing to close and traders are getting ready to move to New York’s market.

But one must be careful as in the very end of London’s session the movements can become quite choppy and harder to predict.

The opening of London’s session is also very active and productive as it overlaps with the ending of Tokyo’s session.

As you can see the other major overlap happens between Sydney and Tokyo sessions, but in comparison with London/NY this time is pretty quiet as it is late evening or night in the rest of the world.

Best days of the week for trading

So now you know the most fruitful time of the day to observe the news and charts and work with the positions, but there’s one more important time frame to keep in mind when scheduling the time – not every day of the week is equally active, see Figure 4:

Best days of the week for currency trading (GMT)

Mondays usually start slower as the news is just in the preparation, but it doesn’t mean you can’t trade on Mondays.

The most active part is the middle of the week, with holidays starting earlier as Fridays are usually active only in the first part of the day.

As you can see the foreign exchange workweek is quite flexible in terms of work-life balance: half of the week when you can work full throttle and the rest for a slower pace, recreation or other projects.

An important thing to understand is that you don’t have to trade all of the sessions, it is neither sustainable nor productive in the long run. Instead, you should choose the most suitable time frame to match your daily rhythm.